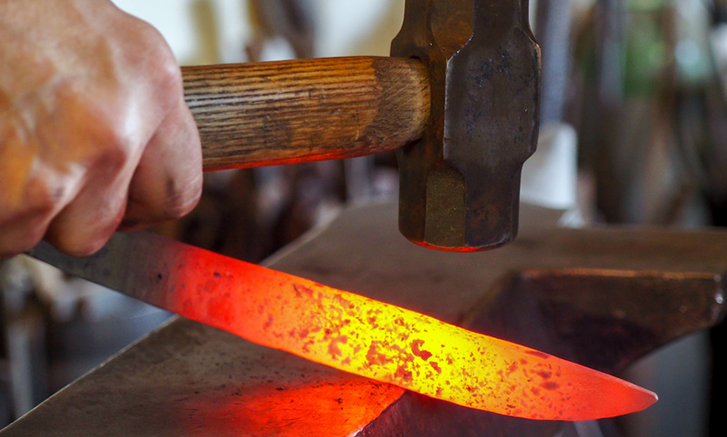 Throughout the ages, knives have been used as tools that aid whoever uses them to make tasks easier, and just as humanity has adapted over the years, so have their knives and tools. The first knives were made of flint that early humans would strike to make a fine point and a thin edge, but since they were made of flint, they were often too brittle for long-term use. As humanity moved from stone to bronze and bronze to iron, knives and other tools would be made of different materials to serve better in their specific purpose.

Now onto today, knives are made from steel and sometimes even ceramic. Over the years, as the knife community has grown and changed, many people have used metallurgical engineering to optimize steel to fit their various needs. This has led to a divide of steels into different categories, mainly high carbon and stainless. We will also talk about some other sub-categories, such as tool steel, semi-stainless, spring steel, and high-speed steel.

There are many ways to affect each category when making the knife, from the composition of the steel and what method was used to manufacture it, the grind of the blade, as well as the quenching and tempering process, will all affect the end product. Even if you have the “perfect knife steel” that offers the best performance in every category, if it isn’t ground and hardened properly, it would all be meaningless.

When it comes to the actual composition of the metal, there are many alloys used in varying quantities to allow for different qualities to be shown in the metal after finishing a blade.

The qualities added by the alloys are as follows:

Now that you have an idea of how each material affects the properties of steel, it’s time to explain how you choose what steel you should look for in your next knife.

When looking at knife steel, it is important to know what you will be using the knife for and what the most desirable properties to have would be. For example, if you are looking for a bush crafting knife to last a lifetime without breaking, then you would want to look into high carbon steels that offer superior toughness and strength while avoiding high-speed steels which offer high edge retention while significantly lowering toughness.

High carbon steel is typically used in harder use tools like bush crafting and any hard use tasks that require high strength and durability. These knives perform well in heavy-duty tasks, but typically have a low corrosion resistance due to the high volume of carbon. Some people refer to these as ten series steels, since most high carbon steel starts with a ten, such as 1050, 1060, 1070, and so on.

There are also CPM steels, which use Crucible Particle Metallurgy to produce steel with a more organized structure. This production method allows the steel to perform at its maximum potential, as long as it has an optimal heat treat and blade grind. CPM steels offer higher edge retention, and toughness than their non-CPM counterparts, with the only downside being that they can only be used in material removal knifemaking and not forging, since forging would compromise the structure made by the CPM process. These steels are only produced by American Crucible Industries.

Lastly, there is the famous Damascus steel; although Damascus Steel originates from the ancient civilizations in the middle east, the original formula for the Legendary material has been lost, and now all that is left is modern-day Damascus, which is made from pattern welding steel. Modern-day Damascus is used mainly for aesthetics or for collection pieces since it doesn’t guarantee the steel will perform higher in any regard and usually falls short when compared to other more optimized steels depending on its composition.