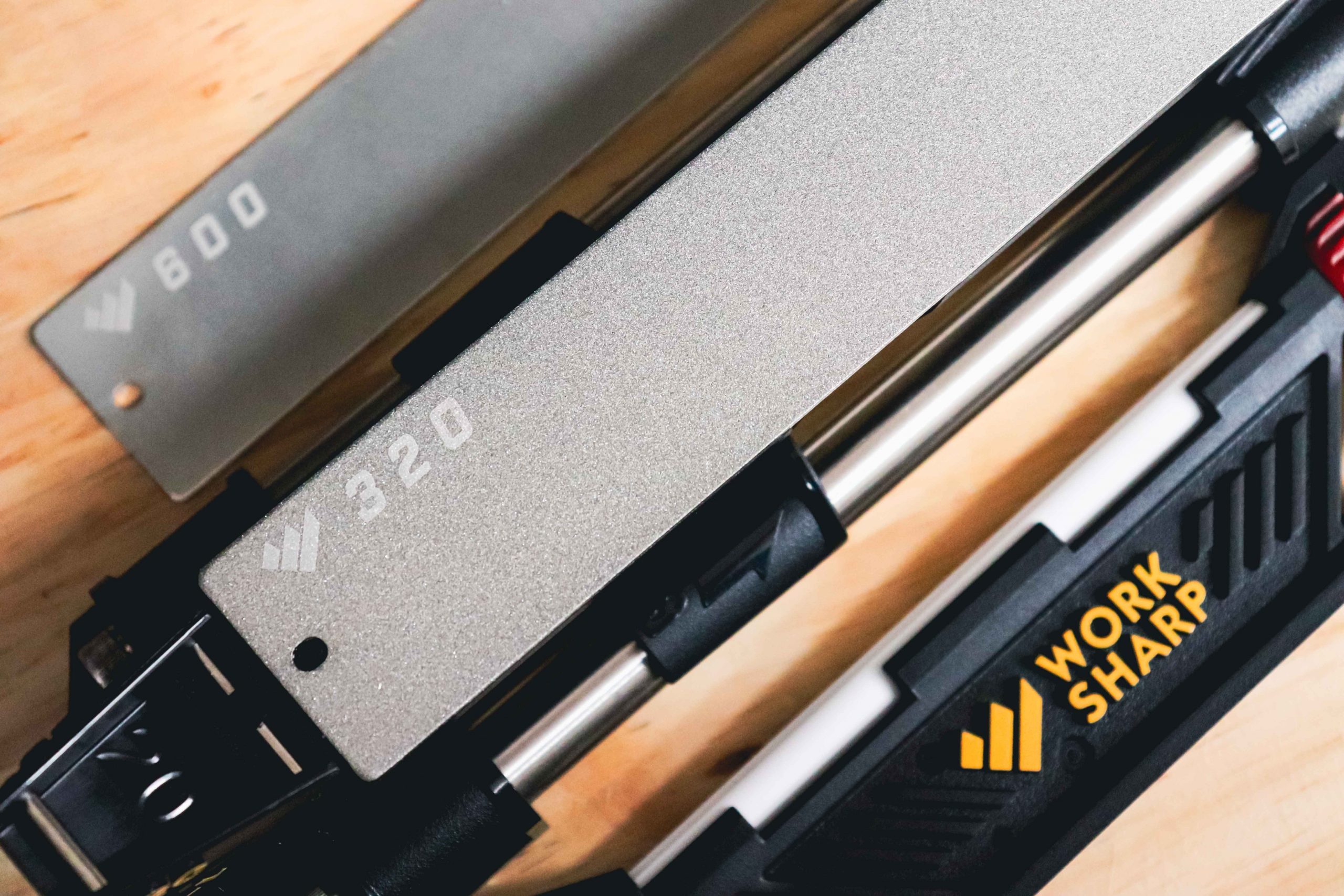 There are a few things to go over before taking the full dive into sharpening materials.

Grit is what most sharpening materials are rated by, which correlates directly with how rough the stone is. They are broadly categorized as Course, Medium, and Fine. There are also more specific categories depending on
the manufacturer of the stone.

When it comes to sharpening stones, many fall within and above the ratings mentioned above, with some going as high as 10,000 grit (typically used to get a mirror polish).

It will depend on how much metal you have to take off to sharpen the blade when you start sharpening. If the knife is extremely dull or if the edge is damaged, then you would want to start with a coarser stone or a lower grit and work your way up to the finer grits according to what finish or how polished you want it to be.

The course, lower grits, will be the best for profiling an edge and getting it to the proper shape, the medium is for getting an edge on the knife, and a fine grit is for producing a sharper, more polished edge. When sharpening, you start with the courser stones while slowly moving to the finer stones as you sharpen.

The blade’s edge will also become sharper and more refined as you get higher in grit and finer in stone. Some beginners attempt to skip the coarse grits to get a sharp edge as soon as possible, but you must trust the process to get the best results. Skipping grits will only make it harder to sharpen your knives.

There are many different ways to sharpen knives, and many sharpening materials to choose from. Whether from stone sharpening or using an electric grinder; each method has pros and cons. Stone sharpening is a more arduous task, as you have to set up the stones, make sure they have an adequate amount of oil or water, and maintain a consistent angle while pushing and pulling the blade across the stone.

Using an electric grinder to sharpen the knife is much faster but more dangerous. You have to make sure that you have a safe environment to use the machine and keep the same consistent angle, but electric sharpeners tend to have an angle guide to help you keep the same angle. They also can overheat the edge and ruin the temper, but this can be prevented by using water to cool the blade as you sharpen.

Starting with sharpening stones, there are three main versions, each one having its unique specialty:

The hard, black, and translucent stones can produce a fine polished edge but typically take longer to use because they don’t take off as much material as artificial stones. They are also rarer than other stones, making them more expensive overall.

Next are Aluminum Oxide stones, which are popular artificial stones known for their ability to remove material quickly and still put a fine edge on a knife. One of the most popular versions of the Aluminum Oxide stones is the India Stones made by Norton, which are graded as fine, medium, and coarse but are considerably rougher than Arkansas stones. These can be used with the Arkansas stones to speed up the sharpening process.

The last style of oil stone is the Silicon Carbide Stones. These stones are the fastest cutting stones on the market; Norton also makes several of these stones, which they have dubbed the “Crystolon Stones.” The Crystolon Stones are also labeled fine, medium, and coarse. Unlike the previous stones, these stones can’t usually put a fine edge on a knife but are used for re-profiling and getting the knife ready to be sharpened and refined with other stones.

Water Stones haven’t been as popular in the western world until relatively recently, but they have been taking the sharpening world by storm with how versatile they are compared to the oil stones. There is a wide variety of water stones, and much like oil stones, they also come in both artificial and natural materials.

The natural stones are pretty tricky, as they aren’t as consistent with the grits and overall quality compared to natural stones, but if you can get a good stone, they are considered some of the highest quality stones on the market.

Synthetic Waterstones are typically made of the same material as the India Oil Stones (Aluminum Oxide). The only real difference between natural and artificial stones is the bonding material that holds the stone together. Water stones use a binder that makes them softer and, therefore, better at removing material because the worn surface on the stone breaks off faster and is replaced with a fresh sharpening surface.

There are some downsides to using the water stones as opposed to the oil stones. While the water stones cut faster, they are still softer overall and therefore wear faster than oil stones. After it wears enough, you will have to use a flattening stone to get it back to a level surface that would be ideal for sharpening.

Flattening stones are made so that after a water stone gets worn down, you can level it again to make it the Ideal sharpening surface.

They typically have a coarse and fine side for flattening coarser and finer stones. To properly use a flattening stone, it’s easiest to take the stone you want to flatten and mark it in a cross-hatch pattern with a pencil in one-inch intervals. This will make it so that you can tell when everything is level since the graphite goes into every divot on the stone, just like with sharpening knives; using water on the stones makes the process smoother and easier. When you begin to flatten the stone, use circular motions while checking it occasionally to see when the pencil marks are no longer visible.

Diamond stones are a little bit different when compared to the others on this list. For one, they are exclusively artificial, with two main styles. The first is Poly-Crystalline, the least stable of the two types. With a composition of multiple crystals that are only partially anchored to the stone’s surface, making them more susceptible to breaking off of the plate and wearing out over time. The more stable variant, the Mono-crystalline structure is a single diamond grain affixed to the plate and won’t break off nearly as quickly.

There are two versions, the first is a flat/smooth plate, and the second has holes in the surface to catch the swarf (small pieces of steel that come off when sharpening). The second is a flat plate that works like any other stone but is more efficient at removing steel. Some people prefer the flat plate version due to it not having any large pores for the blade to get caught in.

Diamond stones are preferable for those who want to take off material quickly and have a long-lasting sharpening stone. The only downside is that the diamond stones are some of the more expensive stones on the market, but they will last longer than most if not all other stones, meaning that the long-term cost can make it a more tempting offer.

Electric sharpeners are simpler than sharpening stones but also come with a bit of a learning curve. You have to keep an even pressure and angle, just like with stone sharpening, but since grinders use a high-powered motor, it removes material very quickly. You have to pay close attention to the knife as you sharpen it to ensure you don’t remove material too quickly.

Since most electric sharpeners use an abrasive belt grinding system, you have many sharpening grits to choose from. You also have some different options with the material that makes up the sharpening belts, with each having other properties. It’s as simple as taking one belt off and swapping it for another, just like with sharpening stones.

So what do you think? Did we answer any questions you had or added to your knife knowledge database? Let us know! Drop a comment down below and tell us what you learned or what you’d like to learn in the future!

Thank you for reading this article, and don’t forget to Stay Sharp!